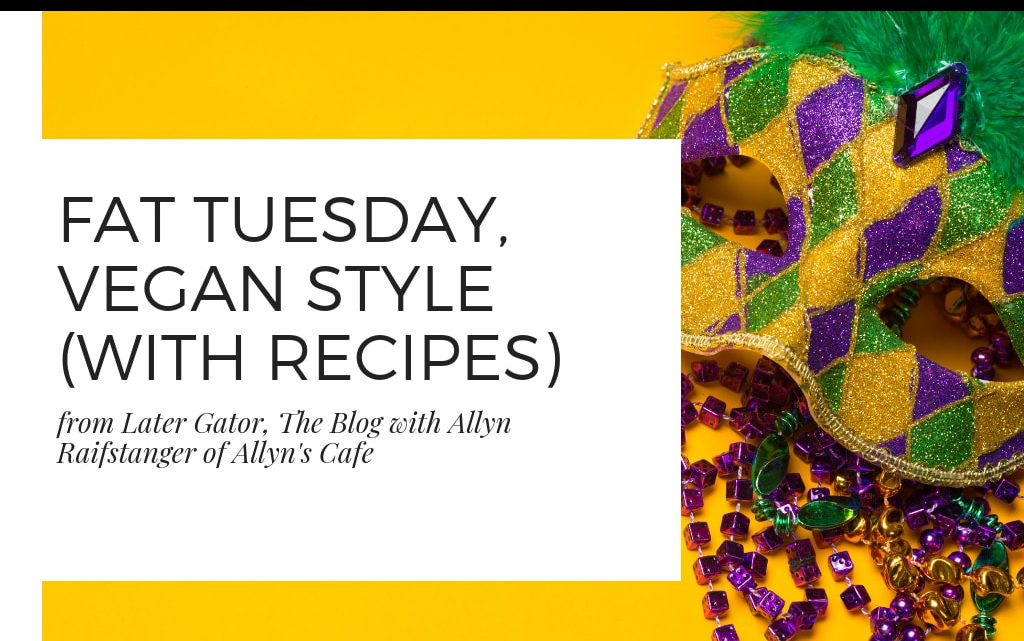 As we approach Fat Tuesday, I thought you would like my Vegan variations on some NOLA classics. Over the 28 years of owning and cooking at Allyn’s I calculate we have made 250,000 entrees of Jambalaya. A quarter of a million is a big number for one item at the restaurant. When I went vegan six years ago, I worked on making the plant-based versions of some of our classics. Here are two Cajun Vegan specialties that you can whip up from my book, Later Gator. We serve the Vegan Jambalaya at Allyn’s and I will introduce the Red Beans, Rice and Vegan Sausage soon. I hope you enjoy them!

Cook for an additional few minutes if needed. Remove the pot from the heat and serve. Cool any remaining jambalaya and save it for leftovers. It heats up very easily and tastes just as good the second time around.

In my quest to do more Cajun recipes, I also came up with a great red beans, rice and vegan sausage recipe. Normally all you do is replace the real meat with a vegan substitute, and they get easier to find all the time. This recipe like the real red beans and rice alternative requires it to simmer for several hours. So, I will usually start it in the late morning for a dinner delight.

I hope you enjoy my variations on New Orleans classics. You can make some really delicious Vegan variations on most of the classics and they are much lower in fat and cholesterol than the originals and have the same amount of protein. Let me know if you like these or if you had any trouble making them.